Drugs can permeate deeply within the inside of your mouth and practising excellent oral hygiene as well as using our special detoxifying mouthwash may reduce the likelihood of a false positive. The mouthwash is designed to be used after ceasing drug use and before a drug test. For the most effective results no drugs should be consumed within 24 hours of the test and mouthwash should be used within half an hour of the test.

If the taste of the product takes you by surprise, start using it gradually. For example, start by rinsing for 10 seconds for the first few seconds and then increase to 20 seconds when you have started to get used it and then finally increase to 30 seconds. Refrain from eating and drinking for half an hour post rinsing.

*Note that this item is not a masking agent and is not designed to cover the very recent use of drugs.

Avoid eating, drinking, or smoking anything for at least 4 hours prior to using mouthwash. 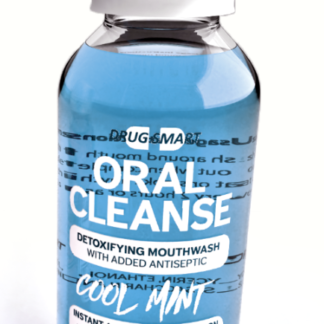 You're viewing: Drugsmart Oral Cleanse Detoxifying Mouthwash 100ml Instant Acting Long Duration with Antiseptic $31.95
Add to cart
Are you 18 or older? You must be at least 18 years of age to enter Ozziesmoke