Wet Stuff Secrets is a silicon based sorbolene cream that has been developed for use with condoms.

If you like creams you’ll love Wet Stuff Secrets. It’s creamy texture will slowly disappear into the skin leaving a satin texture.

It is a long lasting lube but you need to use a little more than other lubes as it disappears into the skin.

Once the initial amount has been absorbed by the skin the remaining lube lasts a long time. 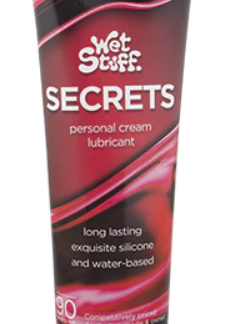