The Golden Shower is a small vial that contains dehydrated synthetic urine. In other words, the urine comes in a powder form that needs to be mixed with water. Our urine contains ingredients such as Uric Acid and Creatine which can be found in natural urine. Further, it is balanced for specific gravity, PH, and it smells. The Golden shower can be kept for a year in its powder form if it remains unopened. Read further for more details on how to look after your product.

The Golden Shower is intended to be used with the Whizzinator, the Whizz Kit and the Clean Kit.

How does it work?

Open your Golden Shower and mix it on a cup with approximately 80 to 90 ml/cc (2.5 to 3.0 Oz) of bottled water. After mixing the vial you can insert the liquid on your Whizzinator, Whizz Kit or Clean Kit.

The Golden Shower is stable for a year after purchase date as long it remains unopened. DO NOT open the vial unless you are ready to use it. If you open the vial and leave it unattended the powder will absorb moisture causing clumps.

Use it for wet sex and pranks. All ALS products are safe, clean, and reliable. 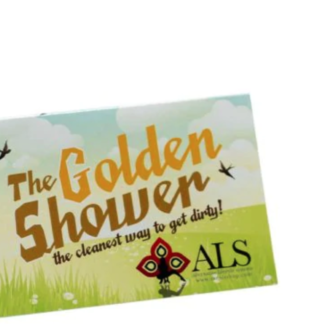